My latest ramblings.
Enjoy! I definitely got important things to say

DEMONSTRATION FOR REVIVAL!!!!
In Support of HB 1947
WHEN: Monday, June 13th, 8 a.m. to 1 p.m.
WHERE: Pennsylvania Capitol Steps on 3rd Street between Walnut and North Streets, Harrisburg, PA
WHO: Survivors, families, friends, supporters & all people of good will
WHY: JUSTICE FOR VICTIMS OF CHILD SEX ABUSE… FINALLY
Survivors of child sex abuse will join hands with families, friends, advocates, and an array of organizations from around the state on the steps of the Pennsylvania State Capitol in Harrisburg on Monday, June 13th – to demonstrate their strong support for HB 1947, which revives expired statutes of limitations for all survivors up to age 50. Demonstrators will be joined by survivors and supporters from New York and New Jersey, who are pressing for statute-of-limitations reform in their home states.
Among the speakers will be MARCI HAMILTON, Resident Senior Scholar in the Fox Leadership Program at the University of Pennsylvania and Academic Director, CHILD USA; and JOHN SALVESON, clerical sex abuse survivor and President of the Foundation to Abolish Sex Abuse (FACSA). Participating organizations include the Pennsylvania Coalition Against Rape (PCAR), Turning Point, NOVA (Network of Victim Assistance), Jewish Community Watch, and FACSA.
According to Hamilton, a renowned expert on child sex abuse statutes-of-limitation and constitutional law, “Pennsylvania has produced more in-depth grand jury reports on serial child predators in trusted organizations than any other state over the last decade. How much more evidence is needed for lawmakers to do the right thing and choose children over pedophiles and the institutions that support them? Children are persons with civil rights who deserve better than this state has delivered so far.”
John Salveson said, “This bill will benefit a majority of child sex abuse victims both retroactively and in the future. Senate leaders should be able to see through the misinformation and half truths being peddled by the PA Catholic Conference and Archdiocese of Philadelphia and support this bill. Their choice is clear and simple –
to protect children and sex abuse survivors or to protect the institutions who for decades have hidden and enabled abusers.”
Joining the above speakers to support justice for child sex abuse victims will be New York survivor and award-winning journalist, STEVE JIMENEZ, and DAVID SHAPIRO, CEO of Jewish Community Watch and former World Champion Martial Artist. In a powerful demonstration of his support for “breaking barriers to protect children from predators,” Shapiro will break over 150 boards on the steps of the Capitol.
“I will break 17 boards for 17-year-olds, 16 boards for 16-year-olds, and so on,” Shapiro said, “to represent all of the ages when children become victims of sexual abuse.” The following day at the state capitol in Albany, New York, Shapiro plans to break another 153 boards to demonstrate support for the Child Victims Act – for a total of 305 boards.
Jimenez, who was sexually abused by a Catholic teaching brother for nearly 4 years and is a tireless advocate for statute-of-limitation reform, added, “It is imperative that survivors join hands and hearts across state borders and any other barriers that exist. Our shared civil-rights mission is to protect children from sexual predators and win justice for those who have wrongfully been denied it.”

Join the armies of survivors and advocates fighting for modest SOL Reform in PA. Most important event for SOL Reform in PA history. HB 1947 is being voted on in Senate Judiciary Committee. Send the message with your presence in Harrisburg to lawmakers that there is only one choice: PA must stop protecting pedophiles over kids. 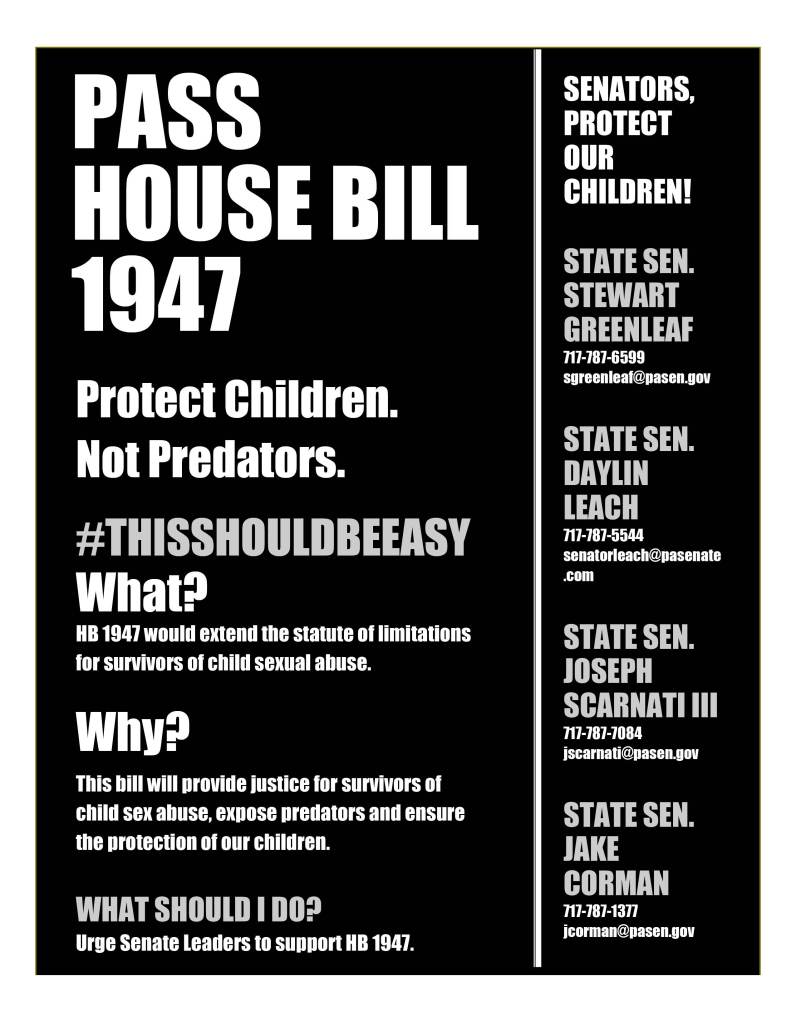 BROOKLYN – Hundreds of people walked across the Brooklyn Bridge Sunday to raise awareness against sexual abuse against children.

Victims of abuse, survivors, parents, children and other supporters all united at Cadman Plaza Park for the “Walk for a Window.”

The public walk was created by abuse survivor Anna Wagner as a demonstration for children’s civil rights. 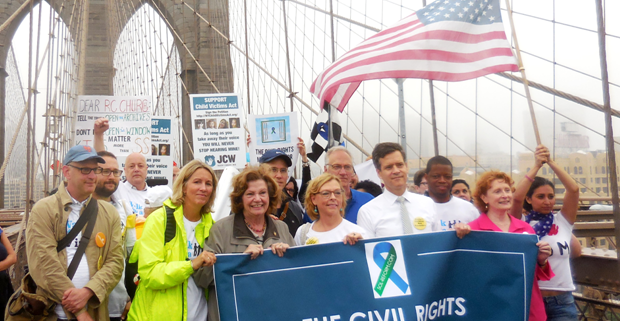 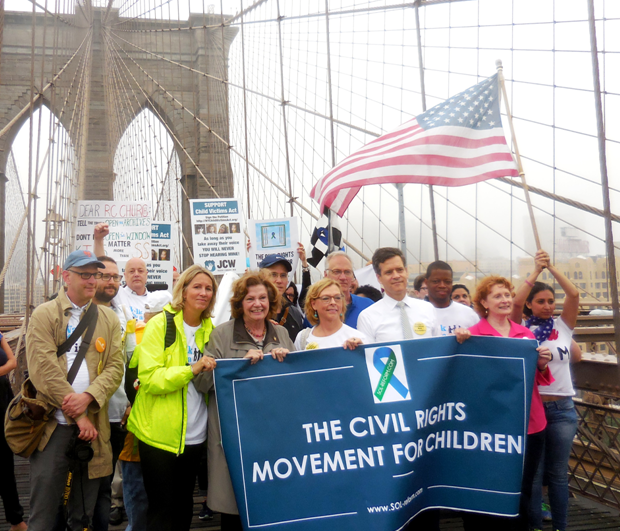 Hundreds of survivors of childhood sex abuse and their families and friends were joined by advocacy organizations from New York, New Jersey and Pennsylvania on June 5th to march across the Brooklyn Bridge to demonstrate broad public support for Assemblywoman Margaret Markey’s Child Victims Act.

The Assemblywoman was joined by Senator Brad Hoylman who sponsors the Child Victims Act in the NY State Senate. The bill will eliminate the civil and criminal statute of limitations for child sex abuse crimes. It will also create a one-year civil “window” to get justice for adult survivors of abuse and help expose pedophiles and those who have hidden them. 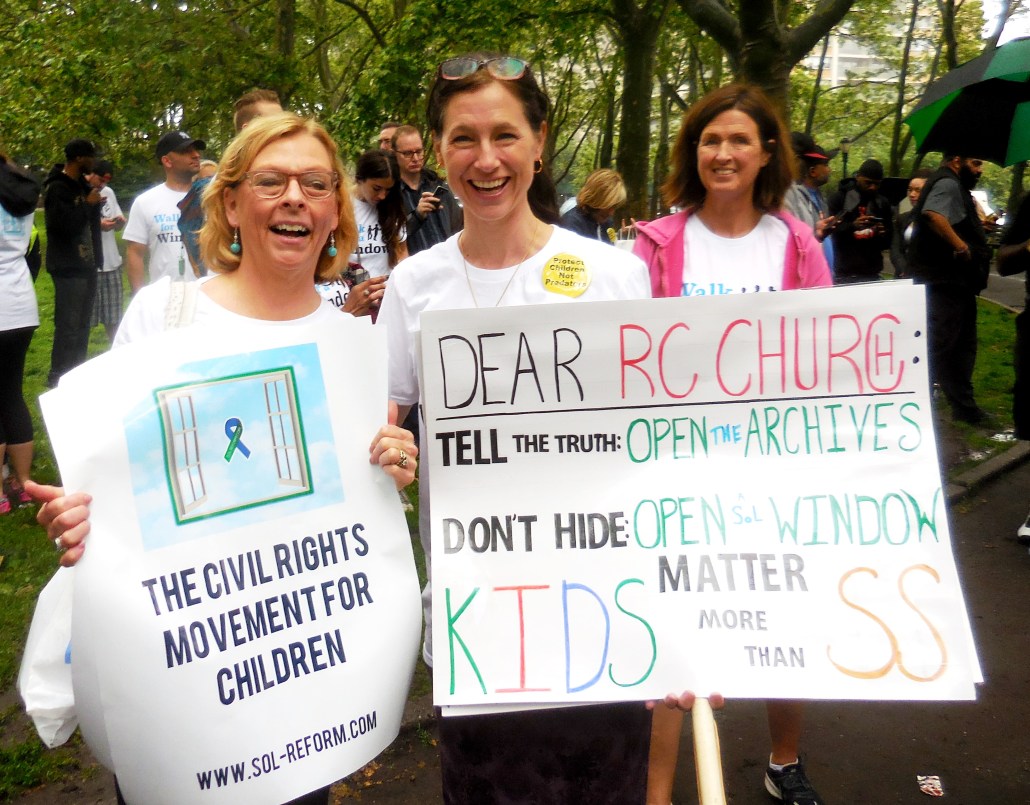 At a rally on the Manhattan side of the Brooklyn Bridge after the “Walk for the Window” march, Assemblywoman Markey said: “My sincere thanks to you and all those who continue to speak out on behalf of survivors and children. Your voices and strong support reflected by this march gives me real hope that the Legislature will, at long last, act in 2016 to bring justice to survivors and help protect children by exposing predators who continue to abuse new generations of kids.”

Senator Hoylman, Senate sponsor of the Child Victims Act, said: “For too long, survivors of child sexual abuse have been denied their rightful day in court. I am honored to join survivors, advocates and lawmakers alike in our Walk for a Window. We’re putting Albany on notice that we’re prepared to go the distance to change New York’s woefully inadequate statutes of limitation, open a look-back window for past abuses, and help bring comfort to all survivors.”

According to Professor Marci Hamilton, noted author and national expert on statute of limitations issues, “New York is one of the worst states in the US for child sex abuse victims but excellent for pedophiles and the institutions that cover up for them. Now NY will be the first state where so many survivors, supporters, and organizations join together to march for basic children’s civil rights.”

Survivor and champion speed skater Bridie Farrell, helped organize the event and was emcee at the rally, said: “No one, no community, no religion, no sport, no family is immune to sexual violence, crime, and trauma. Child sexual violence is not a single crime. The resulting paralysis lasts for years and is never forgotten in a lifetime. It is time for Governor Cuomo, Senator Flanagan, and Speaker Hastie to help victims feel freedom and safety, and see to it that pedophiles pay for their crimes. We have only one choice: to protect our children, not predators.”

Survivors Ana Wagner and Chaim Levin, principal organizers of the march, were among the speakers at the rally. Ana Wagner, said: “I will do everything in my power to ensure that other children do not have to go through the sexual abuse that I had to endure for years.” Chaim Levin, added: “These laws have allowed abusers to get off without consequence for too long and it’s time to change. We will not stop until we see these draconian laws changed.”

Peter Brooks of the Horace Mann Action Coalition said, “New York’s short statute of limitations provides a perverse incentive for institutions to cover up abuse, greatly increasing the size and scope of harm. End the SOL to end the incentive for schools to hide crimes going forward. And open a window for justice to identify known abusers still working with children right now.”

When he spoke at the rally, Ron Savage, who had reported he was molested by hip-hop pioneer Afrika Bambaataa, was supported by a contingent from Zulu Nation. “This march means… I can finally breathe from keeping the pain locked up in me for decades, from being molested as a young teenager.”

Kathryn Robb, a survivor of family abuse on Long Island, said, “This is a powerful movement in which truth, justice and the safety of children shall see the light of day. The secrets, lies, cover-ups and protection of predators can only exist in a room without Windows. We are called forward by the light of Justice.”

Survivor and award-winning journalist Stephen Jimenez has criticized New York’s Catholic Church officials in New York for continuing to spend vast sums of money lobbying against the Child Victims Act. He said: “During his visit to the US last year, Pope Francis….  promised ‘zealous vigilance’ and ‘accountability for all,’ yet Catholic leaders in New York are betraying that promise by continuing to hide truths that the public has every right to know.”

Michael Polenberg, of Safe Horizon, the nation’s leading victim service provider, said: “It is critically important for survivors to be able to hold their abusers accountable in a court of law. We strongly urge New York’s lawmakers to stand on the side of children and pass this much-needed reform bill without further delay.” 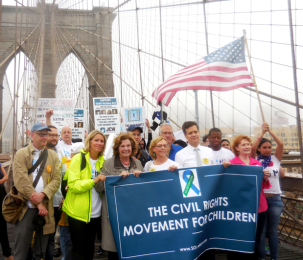 Assemblywoman Margaret Markey and State Senator Brad Hoylman lead march across Brooklyn Bridge to lower Manhattan rally in support of the Child Victims Act of NY. New York is one of the worst states in all of America for how victims of child sex abuse are treated. The bill would completely eliminate the statute of limitations of  these crimes and open a one-year civil window so that adult survivors of abuse can get justice. The reform would also help expose pedophiles who have avoided responsibility for their crimes and hold those who have hidden them accountable. From left are Michael Pollenberg, Safe Horizon; survivor and march organizer Chaim Levin; survivor Steve Jimenez; survivor Kathryn Robb; Assemblywoman Markey; “Spotlight” actor Neal Huff; survivor Philip Saviano, real-life “Spotlight” figure portrayed by Huff; Senator Holylman; hip-hop entertainer Ronald Savage; Assemblywoman Jo Anne Simon, a CVA co-sponsor; and survivor Ana Wagner, march organizer.