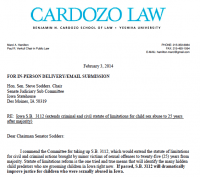 RE:  Iowa S.B.  3112 (extends criminal and civil statute of limitations for child sex abuse to 25 years after majority)

I commend the Committee for taking up S.B. 3112, which would extend the statute of limitations for civil and criminal actions brought by minor victims of sexual offenses to twenty-five (25) years from majority. Statute of limitations reform is the one tried and true means that will identify the many hidden child predators who are grooming children in Iowa right now.  If passed, S.B. 3112 will dramatically improve justice for children who were sexually abused in Iowa.

This bill is a sunshine law for children.  There is an epidemic of child sex abuse around the world.  At least one in four girls is sexually abused and about one in five boys.  Historically, 90% of child victims never go to the authorities and the vast majority of claims expire before the victims are capable of getting to court.  Most victims are abused by family or family acquaintances. This bill would protect the children of Iowa by making it possible for victims to come forward and identify their perpetrators in a court of law.  Given that most child perpetrators abuse many children over the course of their lives,[1] SOL extension does far more than create justice for today’s victims.  It also forestalls future abuse of tomorrow’s children by identifying perpetrators to the public.

By way of introduction, I hold the Paul R. Verkuil Chair in Public Law at the Benjamin N. Cardozo School of Law, Yeshiva University, where I specialize in church/state relations and constitutional law.  My recent book, Justice Denied: What America Must Do to Protect Its Children (Cambridge University Press 2008, 2012), makes the case for statute of limitations reform in the child sex abuse arena.  I am the leading expert on the history and constitutionality of retroactive statutes of limitations with respect to child sex abuse and have advised many child sex abuse victims on constitutional issues, and testified in numerous states where SOL reform is being considered.  I also track the SOL movement in all 50 states on my website, www.sol-reform.com.

There are three compelling public purposes served by the removal of SOLs for child sexual abuse:

(1)  It identifies previously unknown child predators to the public so

children will not be abused in the future;

(2)  It gives child sex abuse survivors a fair chance at justice; and

I have been involved in statute of limitations reform in numerous states. This is the only tried and true method of identifying the many hidden child predators. As Professor Timothy Lytton has documented, civil tort claims have been the only means by which survivors of clergy abuse have been able to obtain any justice. Timothy Lytton, Holding Bishops Accountable: How Lawsuits Helped the Catholic Church Confront Sexual Abuse (Harvard University Press, 2008).

This is a vibrant national movement to protect our children.  Legislative reform for statutes of limitations for child sex abuse victims is on the rise. Criminal SOL elimination has become the norm, with Alabama, Alaska, Arizona, Colorado, Connecticut, Delaware, Florida, Georgia, Idaho, Illinois, Indiana, Kentucky, Louisiana, Maine, Maryland, Massachusetts, Michigan, Minnesota, Mississippi, Missouri, Nebraska, New Mexico, New York, North Carolina, Rhode Island, South Carolina, South Dakota, Texas, Utah, Vermont, Virginia, West Virginia, Wisconsin, Wyoming and the Territory of Guam having already eliminated their criminal SOL for at least some child sex crimes.[2] Although the 2014 legislative session has just begun, 2013 made more progress in opening up abuse victims’ access to justice in 2013 than at any point in history. Sixteen states introduced bills to increase victims’ access to justice by scaling back the SOLs.[3] In 2013 alone, SOL reform was enacted in Arkansas, where the state eliminated the criminal SOL;[4] Illinois, where the civil and criminal SOLs were eliminated;[5] Vermont, where the SOL was increased for certain sex crimes against children;[6] Nevada, where the criminal statute of limitations was extended;[7] and Minnesota, which removed its SOL for child sexual abuse and enacted a 3-year retroactive civil “window.”[8]

On the civil side 2013 was a continuation of the progress made in previous years; Hawaii extended its SOL and enacted a 2-year civil “window,” which went into effect in April 2012.[17] Guam’s bill removing the statute of limitations, and creating a two-year “window” was signed into law by Governor Calvo on March 10, 2011.[18]  Delaware eliminated both the civil and criminal SOLs and enacted a two-year window, from July 2007 to 2009.[19]  Virginia[20] also enacted legislation extending its civil statutes of limitations in 2011, while Florida eliminated the civil statute of limitations for sexual battery of a child in 2010.[21]  Minnesota, Illinois, Florida, Guam and Delaware thus join Alaska,[22] Connecticut[23] and Maine,[24] all of which have eliminated their civil statutes of limitations for child sex crimes.

Already, in 2014, Sen. Jim Beall has introduced bills which would extend the civil and criminal SOL in California[25] and Assemblywoman Markey has reintroduced her bill to eliminate the SOL and create a 1 year civil “window” in New York.[26]

SOL reform has very few detractors other than the Roman Catholic bishops, who have misleadingly argued that reform is unconstitutional on the theory that it “targets” the Church.  SOL reform does not target any particular perpetrator or organization.  Indeed, the majority of victims are victims of incest.  A federal trial court in the Ninth Circuit persuasively upheld the first California window against such an argument.  See Melanie H. v. Defendant Doe, No. 04-1596-WQH-(WMc), slip op. (S.D. Cal. Dec. 20, 2005).

Child sex abuse victims suffer from many negative effects.[27]  Researchers in various studies have found — specifically in men who were sexually abused as children– that long-term adaptation will often include sexual problems, dysfunctions or compulsions, confusion and struggles over gender and sexual identity, homophobia and confusion about sexual orientation, problems with intimacy, shame, guilt and self-blame, low self-esteem and negative self images and increased anger.  There is also an increased rate of substance abuse, a tendency to deny and de-legitimize the traumatic experience, symptoms of Post Traumatic Stress Disorder, and increased probability of fear and depression.

Hundreds of research studies have shown conclusively that sexual abuse can alter a child’s physical, emotional, cognitive and social development and impact their physical and mental health throughout his or her lifetime.  A 2002 study looked at same sex twin pairs where one of the twins was sexually abused as a child and one was not.[28]  According to the study, a person with a history of childhood sexual abuse has an increased risk of the following: major depression, suicide attempt, conduct disorders, alcohol and/or nicotine dependence, social anxiety, rape after the age of 18 years old, and, divorce. [29]

Typically, it takes years for the victim to suffer these negative outcomes:

Some of the effects of sexual abuse do not become apparent until the victim is an adult and a major life event, such as marriage or birth of a child, takes place.  Therefore, a child who seemed unharmed by childhood abuse can develop crippling symptoms years later. . . .[30]

Iowa pays the price of abuse in several ways.  First, the state suffers from reduced productivity from victims, because they have been disabled by the abuse. To the extent that they are not made whole, they are producing less tax-generating income.  The fact that Iowa shuts off prosecution and civil claims before victims are ready to come forward means that many victims have no chance to achieve justice and, therefore, are more likely to suffer serious depression and illness. Second, Iowa bears the cost of divorces, broken homes, and suffering children, which are a sadly prevalent fact in many survivors’ lives.  This creates a drag on local school districts that must provide counseling and guidance for troubled youth, the state agencies that deal with troubled families, and local authorities. Third, the survivors’ medical bills generated by the abuse, whether psychological or physical, are likely to have to be subsidized by state and federal medical programs and funds.

Once again, I applaud you and the Committee for considering this legislation which will help childhood sexual abuse victims. Iowa’s children deserve the passage of statute of limitations reform to protect children today and in the future, and to achieve justice for the many victims suffering in silence.  S.B. 3112 represents a huge step forward for Iowa’s children.

Please do not hesitate to contact me if you have questions regarding statute of limitations reform, or if I can be of assistance in any other way.

[1]           Kenneth V. Lanning, Child Molesters: A Behavioral Analysis 10, 52 (5th ed. 2010) available at http://www.cybertipline.com/en_US/publications/NC70.pdf. (“Except for child prostitution, most sexual-exploitation-of-children cases in the United States involve acquaintance molesters who rarely use physical force on their victims. . . . Although a variety of individuals sexually abuse children, preferential-type sex offenders, and especially pedophiles, are the primary acquaintance sexual exploiters of children. A preferential-acquaintance child molester might molest 10, 50, hundreds, or even thousands of children in a lifetime, depending on the offender and how broadly or narrowly child molestation is defined. Although pedophiles vary greatly, their sexual behavior is repetitive and highly predictable.”)

[25]         California Senate Bill 926 and Senate Bill 924, 2013- 2014 Reg. Sess. (Ca. 2014), available at, http://sol-reform.com/News/california/#pending . See also, “Senator Beall Calls for Giving Victims More Time to Seek Prosecution or File a Lawsuit,” Website of Sen. Jim Beall (D-CA15)  (Jan. 29, 2014), http://sd15.senate.ca.gov/news/2014-01-29-senator-beall-calls-giving-victims-more-time-seek-prosecution-or-file-lawsuit  (“Senate Bill 926 would reform the criminal statute of limitations by raising the age at which an adult survivor of childhood sex abuse can seek prosecution from 28 to 40 years. The bill would affect sex crimes against children including lewd and lascivious acts, continuous sexual abuse of a child, and other offenses. The bill has co-authors from both parties. A second bill, SB 924, proposes to reform the two standards that now govern the statute of limitations for civil lawsuits by:

• Increasing the age deadline to file to 40 years old from 26. This existing deadline is currently used when the victim makes his or her causal connection to their trauma before they reach their 26th birthday.

• Increasing the time from the date of discovery of their trauma to child sex abuse to five years from the current standard of three years. Additionally, it stipulates the five-year period starts when a physician, psychologist, or clinical psychologist first informs the victim of the link between their adult psychological injures and the abuse”).