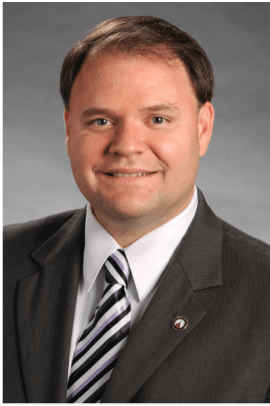 Rep. Jason Spencer was born to a military family on Offutt Air Force Base in Nebraska. The family then moved to Moody Air Force Base in Valdosta, Georgia in 1978 and a year later to Alapaha, Georgia. While growing up in South Georgia to a modest family, he learned the value of hard work where summer jobs included picking peppers and cropping tobacco.

Jason graduated from Berrien County High School in Nashville, Georgia in 1993. After high school graduation, he attended Abraham Baldwin Agricultural College (ABAC) in Tifton and played tennis for ABAC in 1994 as a walk-on. During his time in Tifton, he secured a full athletic scholarship to play tennis at Alabama State University.
Later, he transferred to the University of Georgia (UGA) and graduated with a Bachelor’s degree in Exercise & Sport Science in 1997. After graduating from UGA, Jason sought professional training to become a physician assistant (PA-C) and received his second Bachelors of Science degree from South University, Savannah in 2001 where he graduated magna cum laude.
He has practiced Emergency Medicine as a PA in various emergency departments around southeast Georgia and in Jacksonville, Florida. In 2005, he received his Masters from the University of Nebraska Medical Center. Camden County became Rep. Spencer’s home in 2005 where he currently practices Family and Urgent Care Medicine as a PA in Kingsland, Georgia and in surrounding communities in southeast Georgia, like Waycross, Brunswick and Jesup.

Rep. Spencer was first elected to the Georgia General Assembly to represent the 180th House District in 2010 and was re-elected in 2012 and 2014. He currently sits on the following committees in the State House: Games, Fish & Parks, Juvenile Justices, Human Aging & Relations, Special Rules and Science & Technology.

During his time in the legislature, Rep. Spencer has passed legislation that relaxed live aboard boating restrictions for boaters, legalized home brew beer competitions in Georgia and, most notably, passed key legislation (The Georgia Healthcare Freedom Act, HB 943, 2014) which defended Georgia from some of the more onerous provisions of the Affordable Care Act (aka, Obamacare) and he co-authored HB 990 (2014) which prevented Georgia from expanding Obamacare’s budget busting Medicaid expansion program.  He has also been a staunch advocate for survivors of child sexual abuse.  He introduced and passed reform legislation, the Hidden Predator Act (HB 17, 2015), which extends the civil statute of limitations on childhood sexual abuse cases.  The Hidden Predator Act allows survivors can gain access to justice and expose the identities of hidden pedophiles in the state of Georgia.