Those of us who are concerned about the welfare of survivors of childhood sexual abuse have been very interested in reports about the movie “Spotlight”, which is helping encourage a national dialogue about the cover-up of abuse over many years.

Like most of you, I look forward to seeing this film about a moment in time when the veil of secrecy was lifted on the persistent processes that kept victims in the shadows and protected abusive priests.

I thought you would be interested in this Op-Ed essay by Professor Marci Hamilton that appeared last week in the New York Daily News. Thank you Professor Hamilton for bringing the issue home to New York where we are working hard to eliminate the corrosive statute of limitations on child sex abuse crimes.

The movie “Spotlight” is being welcomed with Oscar buzz. For those of us laboring in the vineyard of child protection, this is music to our ears, because this story — about the Boston Globe journalists who revealed the Catholic bishops’ callous cover-up of prolific pedophile priests — will likely do more to educate the public about child sex abuse than the Boston Globe news stories it is about, or the other child sex abuse scandals in the news, from Penn State and Syracuse to Horace Mann School, Woody Allen and Josh Duggar.
The greatest barrier to child protection is ignorance. The movie shows smart, experienced journalists struggling to comprehend what was right in front of them. “Spotlight” will likely educate millions about the ways in which adults and institutions we trust protect adults and put children at risk every day.
Despite news coverage of one scandal after another, most adults still trust their instincts regarding who is an abuser and who is not. That is dangerous. Until parents, teachers, clergy and all other adults understand the cunning moves of pedophiles and the ease with which we as adults let abusers persist, kids are at serious risk.
HOW MARK RUFFALO BECAME A REPORTER FOR ‘SPOTLIGHT’
“Spotlight” should carry special significance in New York, where, unlike in Boston, so little of the truth about the bishops’ cover-up has surfaced. That is because New York shares the ignominious distinction with Alabama, Michigan and Mississippi of having the worst civil statutes of limitations for child sex abuse in the United States.
True, major sex crimes here have no criminal statute of limitation at this point, but the criminal statutes of limitation that would have been in place for the vast majority of sex-crime victims in New York have expired and cannot be revived. Which means the only recourse left for most victims is in civil court.
In New York City, Timothy Cardinal Dolan sits on a secret archive that likely holds more ugly secrets about hundreds of yet-unnamed priests than any other diocese in the country . Those secrets are being protected by the state Legislature’s refusal to revive the expired civil statutes of limitation. So New York bishops enjoy near-total immunity in the civil courts for their decades of cover up.
Of all Catholic dioceses in the country, New York City is the largest to be so underexamined.
Sitting on secrets
The Catholic bishops are fond of bragging about how they now have the “gold standard” of child protection, but children will never be fully protected so long as the identities of predators are secret from the public. Simple fact: Perpetrators, like Boston’s John Geoghan, abuse into their elderly years.
The 40-year-old who abused children 30 years ago may still be dangerous, and New York parents will not know who all of those priests, rabbis, teachers and family members are until the state’s statute-of-limitations stranglehold is released and victims can come forward in the safety of the court system.
The bishops typically claim that reform bills are not fair to them because they are being “targeted.” Actually, these bills open courthouse doors for victims in every arena. Georgia shared New York’s bottom-of-the-barrel statute-of-limitation status until this year, when it enacted the Hidden Predator Act.
Now, for two years, starting July 2015, victims can sue perpetrators and those who aided and abetted them. The first three lawsuits have been filed against Pak’s Karate; a public school administrator, and a Republican lobbyist. Hardly the stuff of Catholic “targeting.”
“Spotlight” casts such a harsh light on the Catholic bishops’ role in preventing justice for victims of child sex abuse because it is the largest religious institution and one of the largest landholders in the United States . Oh, and don’t forget, because the bishops’ coverup continues today, especially in New York.
Hamilton is a law professor at Benjamin N. Cardozo School of Law and author of “Justice Denied: What America Must Do to Protect Its Children.”
http://www.nydailynews.com/opinion/marci-hamilton-victims-pursue-abusers-article-1.2426370 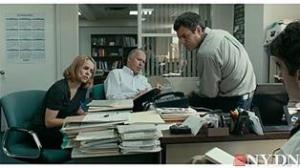