The Horace Mann Action Coalition is grateful to the Bronx District Attorney’s Office, the NYPD, and the Bronx Special Victim’s Squad for investigating the multiple cases of sexual abuse that took place at the Horace Mann School for over three decades. The investigation confirmed the existence of “a systemic pattern of alleged abuse beyond what was outlined in the original New York Times Magazine article.” The District Attorney’s Office concluded that at least 12 separate abusers committed everything from acts of child endangerment to “actual instances of sexual contact, sexual intercourse and criminal sexual acts,” ranging from 1962 to 1996.

Sadly, the archaic nature of New York State’s statute of limitations makes it impossible for any individual or institution to be prosecuted for these crimes. It is for this reason that HMAC supports Assemblywoman Marge Markey’s Child Victims Act (A1771), which would completely eliminate statutes of limitations in the future, and provide a one­year window for old civil cases, in order to give justice to victims and expose abusers.

Most disturbingly, the District Attorney’s Office found a pattern of administrative failure to take sexual abuse seriously at Horace Mann. The report concludes “that throughout the almost four decade period of sexual abuse at Horace Mann, there were instances of abuse coming to the attention of school officials without law enforcement being notified.” Indeed, HMAC has documented at least eighteen cases in which sexual abuse was brought to the attention of Horace Mann teachers, administrators and board of trustee members. In each case, the student who reported the abuse was told that pursuing the accusations might hurt his chances at attending the college of his choice, or that Horace Mann wouldn’t consider a case for which the student had no “video or audio” evidence. It is tragic to consider how much suffering might have been avoided had even a few of the accusations been investigated.

Those who have believed Horace Mann’s assurances that such behavior was a thing of the past will be disappointed to learn that it wasn’t until September 2012­­two months after the New York Times Magazine article that first brought the reports of sexual abuse to the school’s attention­­that “Horace Mann added to their ‘Family Handbook’ a new ‘Policy on Reporting Child Abuse of Students by School Employees.’” What was the school’s policy before September 2012? Did it have such a policy? The District Attorney’s report does not say.

What the report does make clear is that the Bronx District Attorney’s Office judged Horace Mann’s September 2012 policies on reporting sexual abuse by employees inadequate. In what way did they believe it to be inadequate? The District Attorney’s Office felt that Horace Mann’s policy needed to be “amended to highlight the importance of immediate notification to law enforcement.” Was the school’s reluctance the reporting sexual abuse to law enforcement? Or was it reluctant to report sexual abuse in a timely fashion? Perhaps both. The report doesn’t say.

In light of these conclusions, board of trustee chairman Steve Friedman and Headmaster Tom Kelly should take the action HMAC and others have been calling for since June 2012. It should officially and unambiguously acknowledge that sexual abuse took place, it should officially and unambiguously apologize to those who were victims of sexual abuse at Horace Mann, and it should cooperate with an independent investigation into the conditions that allowed decades of sexual abuse by multiple abusers to occur.

We are confident that the District Attorney’s report is the beginning, not the end, of this investigation. The Horace Mann Action Coalition Support Fund has retained Judge Leslie Crocker Snyder to supervise the investigation, and raised funds to support it. We hope that Horace Mann alumni, as well as anyone who is concerned about the sexual abuse of children, will consider making a donation to the investigation. For more information go to http://www.hmactioncoalition.org/ 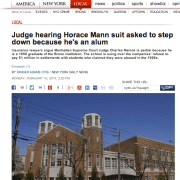