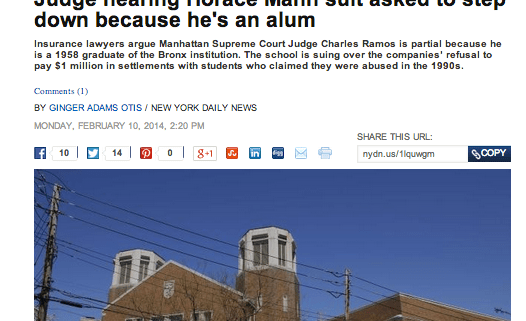 Old school ties may have put a Manhattan judge in a bind.

Lawyers for insurance companies locked in a legal battle with the tony private school Horace Mann over sex abuse claims want the judge hearing the case expelled because he’s an alum, according to court documents filed Monday.

Manhattan Supreme Court Judge Charles Ramos is a graduate of the ivy-covered Bronx institution and therefore not an impartial arbiter, the insurance lawyers argued in the court filing.

Ramos, a 30-year veteran of the courts, graduated from Horace Mann in 1958.

Lawyers for Horace Mann had no objection to one of their own handling the case, court papers showed.

Horace Mann filed a lawsuit against its three insurance companies — all subsidiaries of AIG — last August over $1 million in settlements with two students who claimed they were abused while attending the school in the 1990s.

The insurance companies refused to pay out – sparking the latest round of litigation that landed on Judge Ramos’s desk.

Mark Errico, lawyer for the insurance companies, said he got an email Jan. 24 alerting him to Ramos’s schoolboy connection to Horace Mann.

“An appearance of impropriety exists based on Your Honor’s status as an alumnus of Horace Mann,” Errico said in the Feb. 7 filing.

“Although this connection alone is insufficient to warrant mandatory recusal, Your Honor’s affiliation with the school may cast doubt on your impartiality and could call into question the propriety of this court’s future rulings in this matter,” he noted.

Errico cited the intense media interest generated by the Horace Mann sex scandal, which gained national attention in the summer of 2012 with a bombshell report in the New York Times.

Approximately 32 students have said they were abused over decades at the once-revered school. Almost all of them have received settlements from Horace Mann.

Another student, known as John Doe, has filed a suit in New Jersey, where the statute of limitations on sex abuse cases is more lenient than in New York.

Somary has been named as a serial abuser by several other Horace Mann victims, who also claim school officials colluded over decades to cover up his crimes and similar sexual abuse from other teachers.