A study reported in the June 2013 edition of the journal Alcoholism: Clinical and Experimental Research (Schwandt, M. L., Heilig, M., Hommer, D. W., George, D. T. and Ramchandani, V. A. (2013), Childhood Trauma Exposure and Alcohol Dependence Severity in Adulthood: Mediation by Emotional Abuse Severity and Neuroticism. Alcoholism: Clinical and Experimental Research, 37: 984-992. doi: 10.1111/acer.12053) provides valuable insight into the relationship of childhood abuse and later alcohol abuse. The researchers compared a group of men and women who had sought treatment for drinking problems to a control group who had no current or past problems with respect to drinking.

Both groups were assessed for having experienced five types of abuse at some point in their childhood: emotional abuse, physical abuse, sexual abuse, emotional neglect, and physical neglect. In addition to determining whether or not these men and women had experienced such trauma, the researchers were able to assess how severe that trauma was. Finally, all participants were assessed for a number of personality traits.

The Connection Is Revealed

These findings are important for two reasons. First, they support the notion that genetics alone are not sufficient to account for a person’s vulnerability to addiction. Prior experience also plays a role. Second, the results point a direction for areas that need to be explored in treatment.

Fleshing Out the Connection

Beyond establishing the connection between childhood abuse and neglect and later drinking problems, this study sought to explore the connection by analyzing the results of the personality tests that both groups took. What they found was that the group who experienced emotional abuse and neglect in childhood and who as adults sought treatment for drinking problems reported higher levels of anxiety, depression, and/or anger. In addition as a group these men and women were act impulsively in response to these emotions. That impulsiveness could include drinking as a means of coping with or anesthetizing those negative feelings.

From my own clinical experience I would also add grief and loneliness to the list of negative emotions that can contribute to drinking as a means of coping. These emotional states were not specifically measured in this study. However, many victims of childhood abuse report feeling lonely and isolated as adults, and many also experience grief related to the “loss” of love that they suffered.

As a first step, you can take a minute to reflect on your own drinking behavior with the goal of deciding where your drinking falls on the following spectrum: 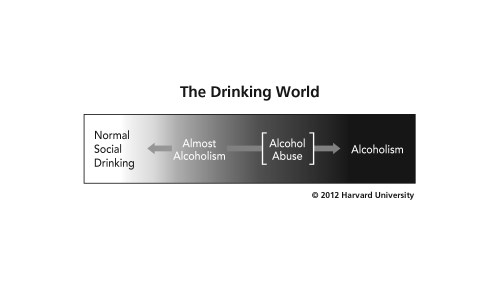 Note that in this view of “the drinking world” people are not simply classified as being “alcoholics” or “non-alcoholics.” That sort of black-and-white thinking characterized society’s view of drinking for a long time. More recently, health and mental health professionals have come to look at drinking in terms of this spectrum. At the extreme right are those men and women whose drinking has caused major negative consequences and who have tried but failed to stop or moderate their drinking many times. At the extreme left would be those people who drink but primarily in social situations. These men and women rarely exceed the recommended limits suggested by the National Institute on Alcohol Abuse and Alcoholism, which is no more than 4 drinks per day and 14 per week for men, and no more than 3 drinks per day and 7 per week for women (www.pubs.niaaa.nih.gov/publications/RethinkingDrinking). Then, of course, there are those men and women who do not drink at all.

For those whose drinking has gotten out of control, abstinence, preferably with the support of a therapist plus a supportive 12-step fellowship such as AA may the only “sane” solution. On the other hand, for those whose drinking falls in the gray almost alcoholic zone, the options may be greater. They may, for example, seek out the professional help of an experienced therapist. Alternatively, they may choose to pursue self-help before considering that option. In either case, though, they need to consider the role that drinking is playing in their effort to control or contain emotions such as anxiety, depression, grief, anger, or loneliness. Bringing these emotions into the light of day, and honestly confronting childhood abuse and the emotional wreckage it creates, can be key to these men and women’s efforts to “shift left” on the drinking spectrum, back toward low-risk drinking.

For additional resources, including a free self-assessment, visit www.TheAlmostEffect.com.

Need help with substance abuse or mental health issues? In the U.S., call 800-662-HELP (4357) for the SAMHSA National Helpline.

Childhood Maltreatment Can Leave Scars In The Brain (NPR)