We don’t know whether Dylan Farrow is telling the truth about Woody Allen, but we do know that the cards are stacked against survivors

Dylan Farrow’s allegations of sexual abuse by her adoptive father, Woody Allen, merit calm consideration, because the charges give us all a close look at what is wrong with our flawed legal and cultural handling of child sex abuse.

As has been widely reported, the prosecutor who investigated the claims in 1993 says that he had insufficient evidence then, though he did not doubt her story. But those criminal claims are barred now by the statute of limitations.

One can fairly ask: How is that so?

Under the law in 1993, Farrow had until age 20 to file criminal charges against Allen. That legal limit covers her criminal claims — and so, now that she is 28, she is barred. Connecticut extended the statute to age 48 in 2002, but that extension did not apply to criminal acts that occurred before that year.

Many are wondering, I am sure, how, if her allegations are true, it was possible that the prosecutor did not have adequate evidence when this young woman first came forward? Sadly, it happens all the time.

Two factors are at play: actual evidence and the disinclination of prosecutors to go after celebrities except in slam-dunk cases.

When victims come forward as children, there is often inadequate evidence for prosecutors to prove an assault beyond a reasonable doubt. There is no physical evidence unless they come forward far more quickly than most children can.

Victims are instinctively ashamed and confused, but also don’t understand what happened, and often don’t even know that it was wrong. You need a certain level of maturity to comprehend what sex is, and what is appropriate. This is especially true when the perpetrator is a trusted adult.

These crimes are even harder to prove because adults invariably assault children in private. If there are other victims who could corroborate the charges, the child has little chance of knowing it, let alone proving it.

In the 1990s, also, many still assumed that sexual abuse was not a very common crime. The incorrect assumption was that we should all be more concerned with Stranger Danger than with fathers, boyfriends or other relatives.

What more of us know now is that the vast majority of sexual abuse happens at the hands of family or close associates.

Without corroborating evidence, and sometimes even with it, prosecutors do not pursue these cases lightly. There is always a concern about how the child will hold up under questioning, even if the prosecutor is certain the abuse occurred.

Another problem lies in the fact that the prosecutor is an elected official who wants to offend powerful public figures — particularly when they have resources to hire the best attorneys — about as much as vampires love garlic. This is Woody Allen we are talking about; an ordinary prosecutor would want bulletproof evidence, not just evidence beyond a reasonable doubt, to charge him with such heinous crimes.

As always happens when a powerful man is alleged to have sexually abused a child, battle lines have been drawn in the wake of these allegations. On one side is the survivor community, many of whom will tell you they were unable to come forward until adulthood, and that they were shut out of the legal system, too. Many are already on social media declaring they believe Farrow.

On the other side are those who have known Allen for years and either can’t believe it is true, or who don’t want to attack him because of the sway he holds in Hollywood. Either way, there are always adults who will stand up for alleged child sex abusers. This is painful for survivors, but it is invariably what happens in these cases.

And we cannot forget: The American system rightly has enshrined the presumption of innocence as a core value.

As adults, we tend to trust our instincts about people, even when we are told by the experts that those who commit child sex abuse tend to be the “nice guys” whom everyone likes, not the malevolent criminal in a shady minivan. But remember: The former is common; the latter, very rare.

That is how Jerry Sandusky, and the teachers at Horace Mann and Poly Prep, along with scores of priests, rabbis and pastors — not to mention many more family members everywhere — have gotten away with abuse over the centuries. Adults trust adults more than they trust children. On this issue, that is a mistake.

According to the most respectable social science, children rarely concoct child sex abuse stories. It is not that it never happens, but that it is relatively rare. Given that Farrow reported it when she was younger, the social science would back her up. But that is not enough to know with certainty who is telling the truth.

All is not lost in the legal arena for Farrow, though. Under Connecticut law, the statute of limitations for civil claims will not expire for 20 more years. She cannot put Allen behind bars, but she does have the option to seek justice, including civil damages, and, as many victims demand, an apology.

Hamilton holds the Paul R. Verkuil Chair in Public Law at the Benjamin N. Cardozo School of Law, Yeshiva University, and is author of “Justice Denied: What America Must Do to Protect Its Children.” 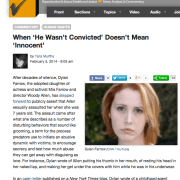