After decades of silence, Dylan Farrow, the adopted daughter of actress and activist Mia Farrow and director Woody Allen, has stepped forward to publicly assert that Allen sexually assaulted her when she was 7 years old. The assault came after what she describes as a number of disturbing behaviors that sound like grooming, a term for the process predators use to initiate an abusive dynamic with victims, to encourage secrecy and test how much abuse they can get away with disguising as love. For instance, Dylan wrote of Allen putting his thumb in her mouth, of resting his head in her naked lap, and making her get under the covers with him while he was in his underwear.

In an open letter published on a New York Times blog, Dylan wrote of a childhood spent frightened and silent and hiding in small, dark spaces, under beds and in closets, trying to avoid her alleged assailant. “He always found me,” she wrote.

It’s a dangerous situation to turn a particular case into a metaphor for a typical case, but as so often happens when recognizable names publicly wrestle with contentious issues, the Farrow-Allen dynamic is now a divisive flashpoint. For many, Dylan has become a symbol—a stand-in speaking the rage of countless victims of childhood sexual abuse who never saw justice, while Allen’s the stand-in for every abuser who ever got away with it.

There are way too many people represented on both sides of that equation. Imagine any other violent crime where so few survivors saw justice. It’s not an accident, though. It is, in part, by design.

It’s obviously not my place to say if Woody Allen is guilty or not. But when the charge is child sex abuse, “he wasn’t convicted” hardly means “innocent.” Our criminal justice system may be based on the presumption of innocence in the absence of contrary evidence in court, it’s also built with laws designed to stop childhood sexual abuse victims from getting into a courtroom.

Historically, statutes of limitation (SOLs) on childhood sex abuse, the parameters for how long a victim has before criminal prosecution or a civil lawsuit, have been set so short that by the time an abused child becomes an adult, the option is gone.

Under Connecticut law, children assaulted in 1992, the same year that Dylan Farrow says she was abused by Allen, had seven years from the time of the assault, or two years after turning 18, whichever is shorter. (Farrow and Allen were in Connecticut at the time she says she was assaulted.)

How many 14-year-old kids do you know who would be able to not only recognize abuse that has been packaged as love, but be ready for the fallout?

Getting to that point is a psychologically and emotionally difficult process that often takes years—decades, even. In many cases, it’s simply logistically impossible for a survivor to pursue a legal case.

In 2002, Connecticut’s SOL had been extended, reflecting the trend across the country ofdragging out, or even abolishing, statutes to reflect what we are learning about how survivors process trauma. (Check your state law here.)

We now know, for example, that childhood victims of sexual abuse often don’t inform authorities, or anyone, about their abuse for years, especially when the abuser is a well-respected authority figure or family member.

We know, too, that children most scared of the consequences of reporting their abuse sometimes deny or recant their story, and that doesn’t mean they’re lying. A study that examined 250 cases of substantiated sexual abuse found that approximately 25 percent of the children recanted at some point, and the kids most likely to waver were the ones abused by a family member.

We also know that many victims don’t disclose childhood abuse at all until adulthood, when they first experience the tentacles of that monster reaching out to destroy relationships because they can’t trust, and destroy their bodies because they self-medicate with alcohol or drugs as they discover that commanding themselves to “get over it” doesn’t work, no matter how hard they try.

Sometimes it “clicks” after a triggering event, such as a friend’s revelation, or a big story like the Jerry Sandusky or Jimmy Savile case. Or, as Dylan wrote, when your assailant is so rich and famous and beloved that the world routinely stands up and claps for him at ceremoniesthat he doesn’t deign to attend—all after marrying your adopted sister.

Even though SOLs have been extending, they don’t apply retroactively, so they will most benefit future victims. In general, the law that existed during your abuse is the law that applies to your case. Just last August, for example, charges filed against a Connecticut school psychologist accused of sexually assaulting a middle-school boy were abruptly dismissed once the court learned the alleged rapes took place in 2000 and 2001, before the statute granted victims the right to come forward up to age 50.

In that case, as with all survivors who discover they’ve run down a clock they didn’t know was ticking, the boy has suffered because of both his assailant and the special interests that have consistently fought against extending SOLs.

Who would fight against justice in this way? Well, besides Hollywood’s elite, the Roman Catholic Church.

The reasons come with a lot of zeroes at the end: It’s no wonder, for example, that the Catholic Church has been fighting SOL reform in Pennsylvania, given the forthcoming civil suits from the sex abuse crisis and the fact that not one priest identified in the 2005 grand jury reporting investigating the Philadelphia archdiocese was prosecuted, all thanks to SOLs. SOLs helped Sandusky as well.

In fact, SOLs on child sex abuse seem to help everyone but the survivors.

All in all, the odds are so stacked against survivors that only 3 percent of rapists ever spend a day in jail. There is a heavy thumb on the scales of justice. It is well-documented. To trot out “but he wasn’t convicted” as definitive proof of innocence of child rape against the backdrop of this system amounts to willful ignorance, a cheap attempt to exploit what should be a sacred tenet of our legal system in an effort to dignify the rape culture myth that says victims are presumed to be lying until proven otherwise in a court of law—and by the way, good luck getting there. 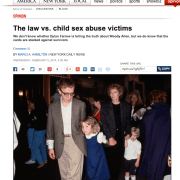