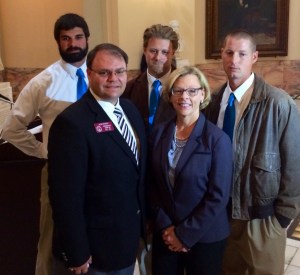 DA: Peeples will not be prosecuted

Criminal charges will not be filed against Craig Peeples, director of Pak’s Karate in Kingsland, despite the district attorney’s opinion that “sufficient evidence” exists linking him to numerous acts of child molestation over more than a decade.

In a March 6 letter from her office to the Georgia Bureau of Investigation, district attorney Jackie Johnson says that the state is barred from pursuing charges on incidents that occurred between 1988 and 2001 in Camden County because the statute of limitations has expired.

According to Johnson’s letter, if the statute of limitations had not expired, Johnson would have taken the evidence to a grand jury, which would then have had to choose whether to indict Peeples. If he had been indicted, he would still have a right to a jury trial, during which it would be the state’s burden to prove guilt beyond a reasonable doubt.

“The expiration of the statute of limitations is an absolute bar to prosecution,” Johnson says in her letter. “As such, my office is unable to proceed to grand jury on these allegations.”

The letter contains allegations from six former students, their identities withheld, regarding abuse that they say occurred at Peeples’ Camden residence and at Pak’s Karate in Kingsland. Some allege that abuse also occurred out of state and out of country when they traveled with Peeples to various karate tournaments, according to the letter.

In an 800-word written statement to the Tribune & Georgian, Peeples calls the accusations “hateful and slanderous remarks” that are “absolutely false.”

“There is no shred of evidence other than those false statements,” he wrote. “These allegations are perpetrated by misguided people with an agenda to hurt me, my family and the Pak’s Karate organization…

“I did not commit the allegations that were made against me by a group of men with an agenda of financial and personal destruction.”

His full statement has been published in today’s edition on page 5A as a letter to the editor.

Three of the six alleged victims – Justin Conway, Christopher Brazell and Steven Tann – spoke to the Tribune & Georgian Wednesday and refuted Peeples’ claims that they lied, saying they spoke up about the abuse to protect other children.

“I’m not planning to open a karate school. I don’t want any of Craig’s money. The only reason I came out and I did tell the GBI is for the safety of the children here in Camden County,” said Tann, who resigned as an instructor from the school last year.

“There is a real concern for the safety of the children at Pak’s Karate and I never want anyone to have to go through what I have had to go through,” Conway said. “… I think it’s disappointing that the statute of limitations means for us that we will never see justice (but) the most important thing is that no other children get hurt.”

Brazell echoed Tann and Conway’s comments, saying that he also spoke out “so the opportunity is not there for him.”

“It’s not about anybody else but protecting children,” Conway said. “Nobody deserves this and nobody should have to endure this. … Bottom line is nobody wants to come forward and tell the truth that these things happened to you. This is about the safety of children and them not having to endure a lifelong sentence that was forced upon us. We were kids.”

Brazell and Conway both said that they have not had contact with a majority of the other victims for more than a decade until the investigation began.

The justice system has failed the six victims and continues to fail by not protecting other karate students, Conway said, adding that the victims have received some backlash in the community.

Tann and Brazell both said they were thankful that the DA’s letter was so explicitly worded.

“I appreciate her coming out with that letter, so people will know the truth,” Tann said.

“Absolutely,” Brazell added. “She went out on a limb to do what she knows in her heart is right.”

Peeples’ statement to the Tribune & Georgian emphasized that the DA’s letter is not a finding of guilt and does not consider any evidence that is favorable to the accused.

GBI opened the investigation into allegations against Peeples in October 2013. Peeples voluntarily stepped down from his position at the Kingsland school but returned to teaching earlier this year. In addition to karate lessons, the business also offers an after-school program as well as summer camps.

In 2012, he was honored by the Brunswick chapter of The Links as a Man of Distinction for his and his business’s contributions to the community.

According to his nomination information, which was published in the Tribune & Georgian, Peeples impacts his students’ lives by encouraging them to “develop themselves in a positive manner and avoid anything that will harm them or others mentally or physically.”

The nomination also states that Peeples has made a difference in the Camden community by providing a safe place for children to go after school.

“He has won countless awards and has well represented the communities in which he serves,” according to his nomination.

According to information posted last year on the Pak’s Karate website, Peeples is a seventh-degree black belt who began training in 1979. He started teaching when he was 13 years old and partnered with another black belt at 15 to open the Kingsland karate school in 1985. Eventually, he opened or acquired karate schools in Folkston, Fernandina Beach, Fla., Brunswick and Waycross.

“Master Peeples has traveled all over the United States, to Korea, England, Puerto Rico, and Costa Rica either for tournaments, training or demonstrations,” the site stated.

At the end of her letter, Johnson requests that the GBI alert her office if the agency receives any additional information pertaining to the investigation.

“… the Legislature has recognized the fact that many child victims do not come forward to report the abuse until years after its occurrence and thus removed any statute of limitations for certain crimes involving sexual abuse of children occurring after July 1, 2012. Consequently, any new evidence or witnesses coming forward could potentially affect our ability to proceed with criminal charges in this case,” the letter states.

Meanwhile, State Rep. Jason Spencer has planned a press conference today in the Capitol Building Rotunda in Atlanta with the alleged victims and their attorney, Marci Hamilton. According to a release issued March 11, she is a leading expert on statute of limitations for child sex abuse.

Spencer, a member of the House Juvenile Justice Committee, introduced a bill in the current session to expand the statute in civil cases, but it died in committee before a vote could be taken. He says he plans to reintroduce the bill in the next session.

“I want to make the public aware of the latest sex abuse victims who have been shut out of Georgia’s courts. Children are at risk,” said Spencer (R-Woodbine). “The district attorney’s office recently released a report about … a local karate instructor who is still teaching children. According to her report, there is sufficient grounds for prosecution. However, these victims may not file criminal charges or file a civil case because of Georgia’s unfair statute of limitations for child sex abuse. We cannot let this continue to happen to our children.”